CNN has just voted Chinese Century Eggs as the most revolting food on earth Eh, whatevers, me thinks they are delicious, especially in century egg and shredded pork porridge. Mmm, yum. It's so annoying when people do this; I don't see how Century Eggs are more revolting than blue cheese, both look moldy and weird and both stink in their own ways, but somehow century eggs are revolting cuz they are Chinese and hence exotic, whatevers, eyeroll. Long live century eggs... not that they haven't lived long enough :)

Here is what a whole century egg looks like... 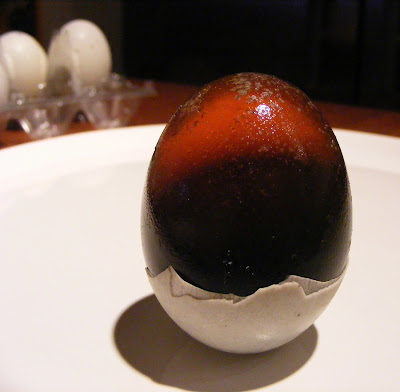 Here is what they look like sliced up... yeah the inside is gooey and blue and very toxic looking. 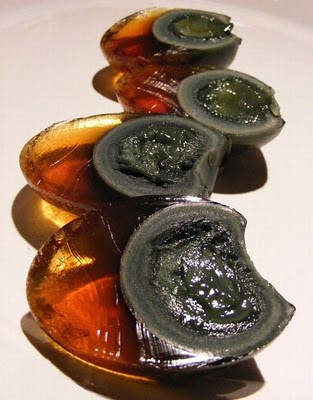 Balut eggs? Faint. This civilized kitty cannot handle duck embryos. Yuck and no it wasn't on the list.

Ha. I picked up a half dozen of each on sale at Ranch 99 last week. Even the cashier tried to talk me out of it. Love 'em. But that takes a lot of nerve coming from CNN. Georgia southern cuisine has much odder items on the menu.

CNN needs to extend on their research. Have you heard of Casu Marzu? Make sure you eat prior to watching this video. The climax is at about 3:55 minutes into the video.