Paul the Octopus is said to possess psychic powers as he has correctly predicted every match involving the German team in the World Cup. Isn't he the cutest Octopus? Anyways, now he has predicted the team that will take it all... and he chose Spain over Holland... His keepers at the German aquarium better watch out for any clog wearing visitors...Hmm, Paul, which numbers should I pick for the next lottery draw. I will give you 1/3 of the winnings, Ok, 1/2... deal? 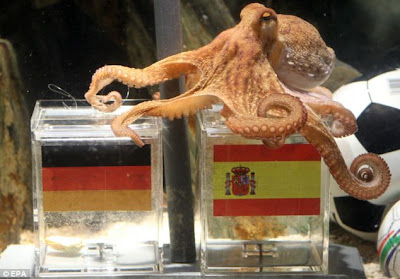