Ride of the Piglets

Imagine Wagner's Ride of the Valkyries is playing in the background... dun dun dun dun dun dun dun dun... except this time it's five piglets who have descended upon China Gate Restaurant (a Korean style Chinese restaurant in Ktown)...First up: this was really good, kind of similar to a Chinese cold noodle dish, you get an assortment for shredded veggies and meats and some clear noodles and throw in some mustardy sauce, then voila, yummy! Btw, the portions here are enormous (easily twice the size of most restaurants). 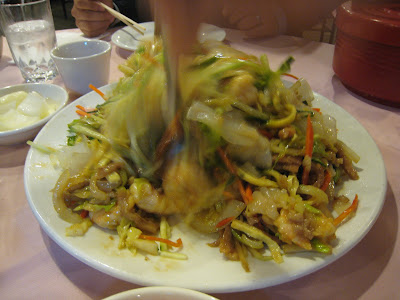 Then the sugar glazed shrimp and our veggie dish came up... 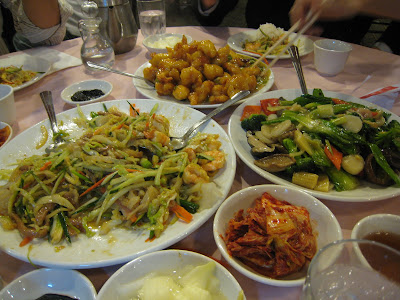 Jjajangmyun (JJM). Culture works in funny ways. JJM is a northern Chinese dish, and per Chez Pei, it is popular in China and Taiwan. Around 100 years ago, some Chinese immigrants took the recipe to Korea and the Koreans made some tweaks here and there and now it's also super popular in Korea. Btw, this bowl alone can feed like three to four ppl, so to be on the safe side, we ordered three bowls for five of us. 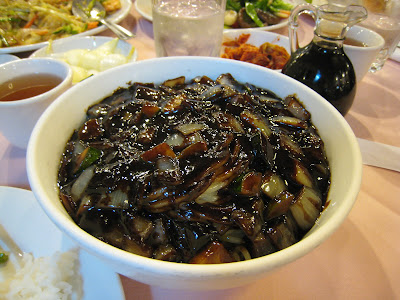 JJM after it's properly mixed. 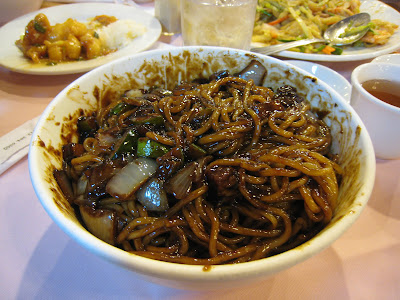 We then went into a eating frenzy: CHOMP MUNCH CHOMP, OINK OINK, SLURP... chopsticks, JJM, glazed shrimp flying everywhere... When the dust settled, H, P and E were happily talking about the art of snow boarding videotography, and L was ever so elegantly still trying out a few JJM noodles here and there... and Cat was in a food coma. I think L waved a few fingers in front of me to make sure I was still alright... Then I snapped out of my stupor, and we paid, went outside to the parking lot, checked out Baby Catmobile, and called it a night... 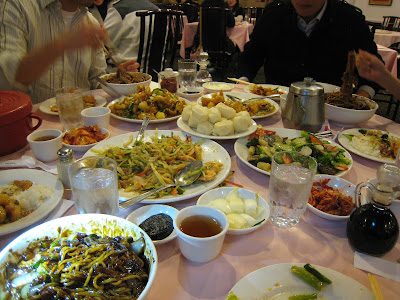 K, I stand corrected, it is very popular in China, but I don't think it's as popular as it is in Korea cuz they love JJM and it's like the most popular delivery dish in Korea. Yeah, I like the Chinese version better too.