When I was in Shanghai, I called up a childhood friend and was ecstatic to learn that her parents were visiting her in Shanghai (I hadn't seen them in almost thirty years). We met up next to her apartment at a restaurant that specialized in Shaanxi cuisine. I was born in Shaanxi Province and spent two years there so I was super excited!

Tossing liang pi... so so good. Btw, all the cold dishes were excellent -- the lotus root (marinated in slightly sweet and sour sauce and with just the right crunchiness), the green veggie dish is actually walnut tree leaves. Oh Auntie and Uncle W also got traditional Shaanxi pancake with pork, also perfect. 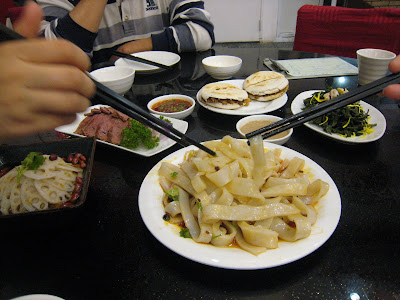 Shaanxi cuisine tends to be fairly spicy. Unlike Sichuan cuisine, which is known for being mala (numb and spicy), or Hunan cuisine, which is known for ganla (dry and spicy), Shaanxi cuisine is known for being suanla (or sour and spicy). Here is a Shaanxi version of boiled fish called - Big Pot Fish. There were fish, Chinese napa cabbage, glass noodles, and a whole host of other goodies in the pot. I don't remember it being sour, but the spicy sauce was so good, really flavored the mild fish. Drooling again. 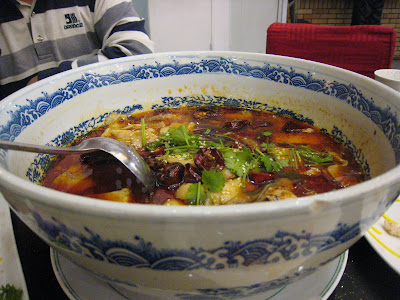 We also got spicy piggy knuckles, Big Mix Dish and a tofu dish. They don't look much, but they were so good. The pig knuckles were the perfect finger food, the Big Mix Dish is a Shaanxi favorite because it combines many ingredients and is known for its nutritional value. Last but not least, I know the tofu dish looks kinda plain, but when I tasted it, I don't think I can eat supermarket tofu again. The tofu actually tasted of beans! And it also had pieces of veggies in it too. When I tasted it, I knew I had eaten it when I was little but had forgotten the flavor after so many years... so it was like meeting an old friend again. 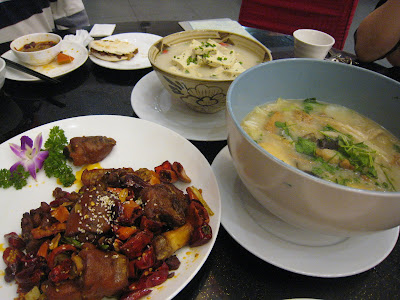 And the grand finale, Shao Zi Noodles (臊子面), a staple of Shaanxi diet. After all the food, I didn't think I could eat anymore, but boy was I wrong. The soup was light and slightly sour so it actually relieved my fullness. The noodles were excellent and they came with cubed veggies, meats and thin egg pancake. Incredible. It was just a simple neighborhood restaurant, but in my mind, it beat all the fancy schmancy Michelin starred restaurants. Simply good, perfectly seasoned food. 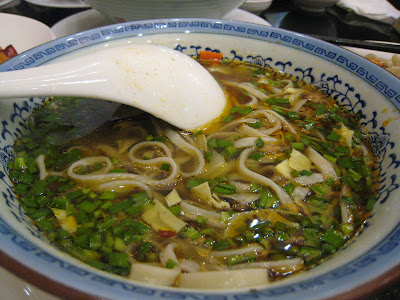